Posted on September 25, 2014 by RowesAndColumns 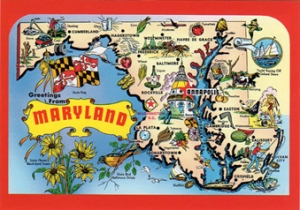 I’ve been traveling for the past 3 months – mostly for work, but a little for fun. 🙂 So ironically, I haven’t had much time for Postcrossing, but I’ve been able to add a TON of postcards to my collection! I can’t wait to start sending official cards again, and swapping more often! 🙂

I found these 2 new USA mapcards of Delaware and Maryland, which I’m really happy to add to my collection. 🙂 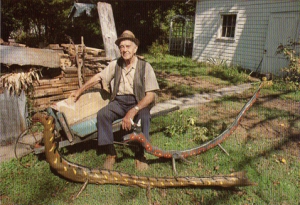 And these 2 cards are from the Miles B. Carpenter Museum in Waverly, Virginia. This is such a neat museum! I’m so happy I went there. Miles B. Carpenter was an American folk artist who ran a lumber and ice business for many years. He started carving wood when he was younger, and picked it up again after he retired and his wife died. Many of his pieces include a small piece of fur cut from his late wife’s fur coats. The museum is in his old house which I thought was really neat. You can read more about Mr. Carpenter here. These postcards show two of his “Loch Ness Monsters” and the other card shows him talking to a little girl alongside his 19th century Pennsylvania Dutch Santa Claus.

And to note, the Miles B. Carpenter Museum is right next door to the Peanut Museum! It’s the “oldest peanut museum in America” – and I’m guessing the only. 😉 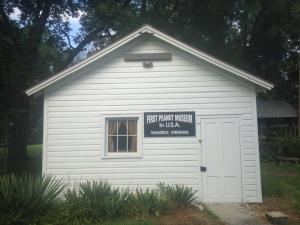 Posted on January 3, 2013 by RowesAndColumns 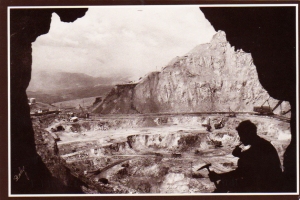 My fiancé’s dad sent me this really neat card today! He lives in Maryland, but the card is from Jerome, Arizona. The photograph is from 1927 and shows a miner overlooking the shovel pit of United Verde Mine, which was nicknamed Arizona’s Billion Dollar Copper Camp.